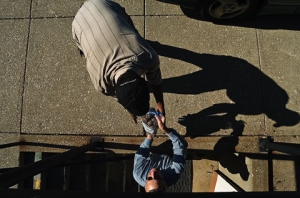 These days, food pantries aren’t just for the jobless or homeless.

Tapping such free resources has turned into a survival tactic for some working members of the middle class as they struggle with an economy that has put them in a bind.

“I sat here at home and argued with my wife about who’s going,” said Bill, a Nassau County employee who asked not to be identified further. “I tried to go to work that day. … It’s very embarrassing.

“Here I’m making a decent salary. I’m a professional, but I can’t even feed my kids.”

More and more working Long Islanders are straining to put groceries on the table as many essentials — milk and bread, fuel oil, gasoline and health care premiums — have climbed faster than the Consumer Price Index. In some cases, they’re people daunted by the steep rise in property taxes or payments on their adjustable-rate mortgages.

These new hard times have turned some past donors into today’s receivers of charity. The number of people seeking help is up even as donations are down. Food collected from restaurants and supermarkets by the Mineola-based Island Harvest dropped from 7 million pounds in 2006 to 6.5 million last year, and the agency has started pressing more farmers to help fill the hole.

While no agency keeps statistics for food pantries across Long Island, some operators find they’re facing double the number of clients from a year ago.

“We’re seeing folks that may own a home, who may be working two or three jobs, but are not able to cover all the costs that they’ve incurred,” said Gwen O’Shea, president of the Health and Welfare Council of Long Island, a social services advocacy group. 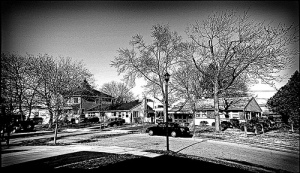 From The Nation — “The New Suburban Poverty” — selected excerpts:

Last December the Brookings Institution published a report showing that from Las Vegas to Boise to Houston, suburban poverty has been growing over the past seven years, in some places slowly, in others by as much as 33 percent. “The enduring social and fiscal challenges for cities that stem from high poverty are increasingly shared by their suburbs,” the report concludes. It’s a problem some may assume is confined to the ragged fringes of so-called “inner ring” suburbs that directly border cities, places where the housing stock is older and from which many wealthier residents long ago departed. But this isn’t the case. “Overall…first suburbs did not bear the brunt of increasing suburban poverty in the early 2000s,” notes the Brookings report, which found that economic distress has spread to “second-tier suburbs and ‘exurbs'” as well.

The result is a historic milestone that has gone strangely ignored: For the first time ever, more poor Americans live in the suburbs than in all our cities combined. …

What you’ll also see are people like the day laborers who gather every morning in the parking lots of the Home Depots in Nassau County, Long Island, where the median family income is $87,558 and the overall poverty rate is fairly low, but where the demand for food stamps has increased by 40 percent since 2003. …

Price used to make $15 an hour, with health benefits and vacation days. What he’s hoping to avoid is the fate of people like Jodi Wilmouth, whom I met at the Rockingham County Red Cross, which opened a food pantry several years ago in a low-slung brick building in Eden. Wilmouth earns $6.25 an hour as a cashier at a local department store called Belk, which she said is not enough to cover her basic expenses. On the day she dropped by, President Bush was visiting a Caterpillar plant in Peoria, Illinois. He later said that in today’s economy “workers are making more money.” …

But the suburbs also have their disadvantages, among them the fact that getting anywhere generally requires a car. There’s no public transportation system in most outlying suburban areas, which is why the people who show up at the food pantry at the Red Cross in Rockingham County often carpool to get there, cramming one person each from four or five families into a single vehicle to save gas. Then, too, the newness of suburban poverty means in many towns there’s a dearth of social service agencies to offer help. Nearly 7,000 people showed up at the food pantry last year, a sevenfold increase from 2000. “It’s overwhelming,” said Janna Nowell, the facility’s director. The day before I visited, the pantry ran out of food, a problem that’s become familiar in many suburban locales. “There’s a growing spatial gap between the providers and the people in need,” says Alan Berube. “Public hospitals, nutrition assistance programs–most of these things are still overwhelmingly urban. You see small-scale operations in suburbs getting inundated. They just can’t deal with the demand.” …

Unravel the thread linking suburbs to prosperity and something else begins to come undone: the story Republicans have told about how people living there, particularly those in the fastest-growing, furthest-outlying communities, are their natural constituents. “Democrats stink in the exurbs” is how conservative columnist Brooks put it some years ago, pointing to the strip-mall zones around Orlando, strong Jeb Bush territory, and to Mesa, Arizona, a booming area east of Phoenix. In these rapidly expanding communities, places where the parking lots of megachurches fill up every Sunday with SUVs, liberals just don’t have a clue what matters to people, Brooks implied. In the 2004 election, it appeared he was right: Republicans swept such areas, carrying a startling ninety-seven of the 100 fastest-growing counties in the country. In Democratic circles, panic ensued.

–Continued at The Nation.

Harvesting the News – A Progression To Story!

News reporters gather information in three ways: by interviewing people, by researching the written record and by observation. The better you are at these, the better your stories will be. This news-gathering triad underlies all good reporting and good writing. In fact, good information, even poorly written, is better than soufflé writing, or writing with no substance.

1. The more ways you gather information, and the more information you gather, the better your story will be. You will move closer to the “actual reality” of the event. Remember your goal is to use any legal and ethical means to learn what’s really going on.

2. Let’s start with the simplest type of news gathering, the story gathered in only one of the three ways. It is based on what you are told, rather than what you discover for yourself. This is source-controlled, source-originated journalism. Let’s call it level 1 journalism.

3. Level 1 stories result from handouts, press releases, press conferences, speeches and statements. They result from what someone tells you. It is surface journalism. It is the work of a clerk, not a reporter. This type of reporting doesn’t have to be bad. It can be information from the city as to when the trash will be picked up, or when to register to vote.

4. But level 1 journalism has its problems. The material can be one-sided. It can be offered by the source for personal, political or economic gain. If the newspaper is filled with this kind of material, the reading public becomes apathetic and distrustful.

5. Worse than being one-sided, level 1 journalism can be wrong. Frequently, people don’t know what they are talking about, and sometimes they lie. So, what’s a reporter to do? Be skeptical. Good reporters question what they are told. They check and double check. They rely on what they are told, but they improve upon it by talking to more than one person, by searching the written record, by trying to see for themselves. As President Reagan said of the Russians, “Trust but verify.”

6. A word of caution: There is a difference between skepticism and cynicism. A skeptic is one who wants proof, but he or she is not prejudiced against face-value explanations. A cynic, on the other hand, refuses to believe face-value explanations and is ready to ascribe almost evil motives to those he or she covers. A good reporter is skeptical but not cynical.

7. When you take what someone tells you, and supplement it with information from your own research, your own observations, or with what others tells you, you move to level 2 journalism. You shed “air and light” on the subject, to use Lincoln Steffens’ phrase. You “climb the stairs,” according to A.J. Liebling. Remember the sign in the Los Angeles Times office: GOYA/KOD, Get off your ass, knock on doors.

8. By operating on the information you have been told, you move from level 1 journalism closer to the “actual reality.” You provide background, details, reaction from others, and your own observations as verification for what has been provided.

9. Suppose you were sent to cover a speech by the director of a university writing center on the subject of student writing. If you went to the speech and reported strictly what the speaker said, that’s level 1 reporting. If you talked with tutors, students, professors, other writing centers, if you visited there yourself, if you provided a history of the center, then that’s level 2 reporting.

10. If you take it one step further, if you attempt to answer the so what? question, if you provide some information on the causes and consequences of the issue, then that is level 3 reporting. Level 3 reporting tells the reader why things are as they are, why they work or don’t work.

Some key elements when considering “newsworthiness” are:

For your topic, ask:

Read here about finding your Angle and Whammy!

Coverage of the Disenfranchised